A DAY IN THE LIFE OF A SUPPORTING ARTISTE – PART 8

Today was a peculiar day for the boy I was commuting with. Not only was this his first day on set ever, but he had been booked for a coveted role of a body double.

Now body doubles not only have the privilege of a bigger pay-packet for the end of the day, but they have more downtime on set but because they’re representing a principle character there seems to be a greater respect for them because of it. Typically, a double doesn’t necessarily need to look like that person or have similar hair, but will have the same height and measurements as whoever they’re doubling for but there are exceptions to the rule. For example here’s me when I doubled for Colin Morgan for Merlin, then halfway through the day I changed into Lancelot’s gear. 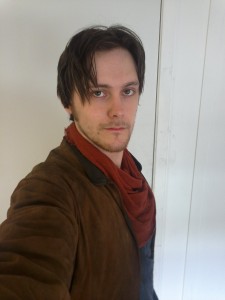 Awww bless. So young there. Anyway, so this poor lad who has no idea what to expect in general for the day was eased into things with his own trailer although so introverted he refused food despite being told that it was more than ok help yourself. Not sure if he was a fussy-eater in fear of embarrassing himself or he was just shy and didn’t want anyone making a fuss over him.

What made me feel more sorry for him was what he actually had to do on set. You see, doubling is a seamless role where when it’s edited it all blends and nobody can tell that the portion of body which is on screen is actually in fact not the same person you saw literally milliseconds before. Another example where this kind of trickery comes into play is when I was a stand-in on a production before and the two main characters are having a conversation over a pint each. Next thing you see is a close-up of my hand clanking glasses with someone else and the viewer automatically assumes it was the characters. Fun eh?

Not so much fun for this lad. Fully donned in the principles costume and wig was rendered quite futile as he spent most of his time on set in a cage with only his fingers visible. Again, this is quite laughably similar to a previous post but again it’s one of those things prove the unpredictability of life on set and the need to cover yourself for any scenario which may and may not occur. On this occasion, it was what didn’t occur.

A DAY IN THE LIFE OF A SUPPORTING ARTISTE – PART 4

A DAY IN THE LIFE OF A SUPPORTING ARTISTE – PART 23

A DAY IN THE LIFE OF A SUPPORTING ARTISTE – PART 5

A DAY IN THE LIFE OF A SUPPORTING ARTISTE – PART 7

Made with in Cardiff